LIFTING THE LID ON THE BRANCHLINE - RANSOMES & RAPIER 45T STEAM CRANE
The Bachmann Branchline OO scale Ransomes & Rapier 45T Steam Breakdown Crane has been highly anticipated since it was announced and, with the four models set to arrive imminently, we take a closer look at what you can expect.

This is one of the most complex projects that Bachmann has undertaken. From the outset it was clear that the prototype presented the opportunity to produce a ground-breaking model, like nothing that has ever gone before it, but it was certainly not going to be easy and there were many engineering challenges ahead. Bachmann were lucky in that six of the eight cranes survive in preservation, which allowed their team to carry out extensive site visits, creating vast records of dimensions, details and photographs.

As we will see, there were numerous differences to be found across the eight examples when new, and, like any heritage vehicles further modifications are often made during their working lives and into preservation. Therefore, we cannot solely rely on the preserved examples and must consult historic drawings, documents and photographs to ensure that our models are faithful to the prototypes on which they are based.

The complex rigging of the prototype, and the exposed nature of gears and inner workings, made this element particularly challenging – especially as it was required not only to look the part but also operate prototypically. Thanks to the determination of the Bachmann team, not only here in the UK but in the design offices and production facilities in China too, they have achieved that – and more too!

Operation of the crane’s jib and hook is made possible by an ingenious key mechanism located at the rear of the crane. The two boiler washout plugs are removable, by way of magnets fitted to the plugs and on the end of the key, and by removing these two key holes are exposed. By engaging the key with the left-hand socket, the hook can be raised or lowered – note that the cylinders will also operate, synchronised to the movement of the hook. The right-hand socket raises and lowers the Jib and in doing so you will notice that the minute safe lifting angle indicator on the side of the cab will also operate in tandem.

The four outriggers, used to stabilise the crane when carrying out heavier lifts, are poseable, sliding in and out of the crane chassis. There are three variants of chimney which are hinged so that they can be posed in-use or stowed for transport, the driver’s platform to the side of the cab is also hinged, as is the roof hatch which would have been lifted when the crane was in use. The crane body rotates by a full 360 degrees, with the gearing between crane and chassis all present and correct of course!

This attention to detail extends beyond the crane itself: the relieving bogies are modelled in either their original open-framed condition, or in later life with platforms fitted. Two different variants of jib runner have also been portrayed, one of which has further variations including the configuration of the toolboxes.

A notable feature of the prototype were the large, cast plates fitted to the sides and solebars of the crane. These differed between each crane and not only have they been faithfully reproduced on the model, but etched versions have also been produced and are included with each model for you to add - each of the four models having a bespoke set of etches for full authenticity.

The all important Accessory Pack includes vacuum pipes and screwlink couplings for each of the vehicles along with a spreader beam and jib & hook operating key - there is even a ladder which can be posed as you wish to allow your miniature crew to access the crane deck or cab! Each model also includes a set of etched plates which can be fitted over the printed renditions of the cast plates - please note each crane carried different plates and these differences are accurately portrayed in both the print application and on the etches supplied with each model. 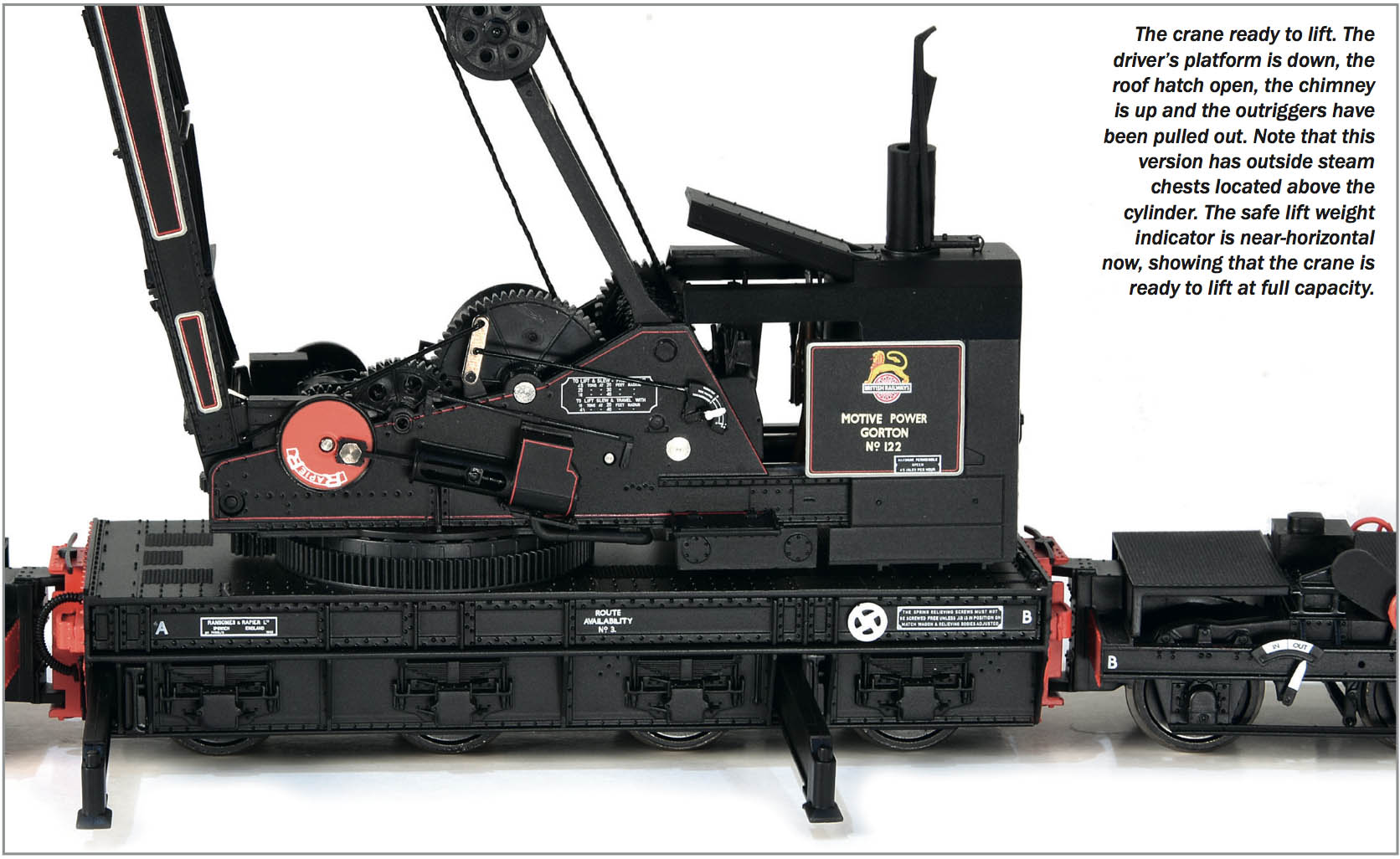 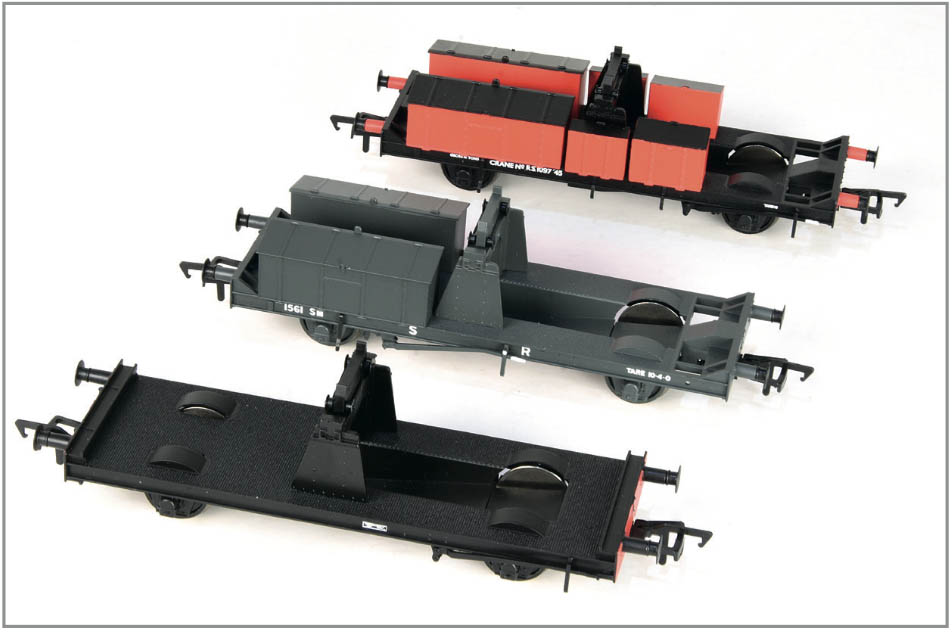 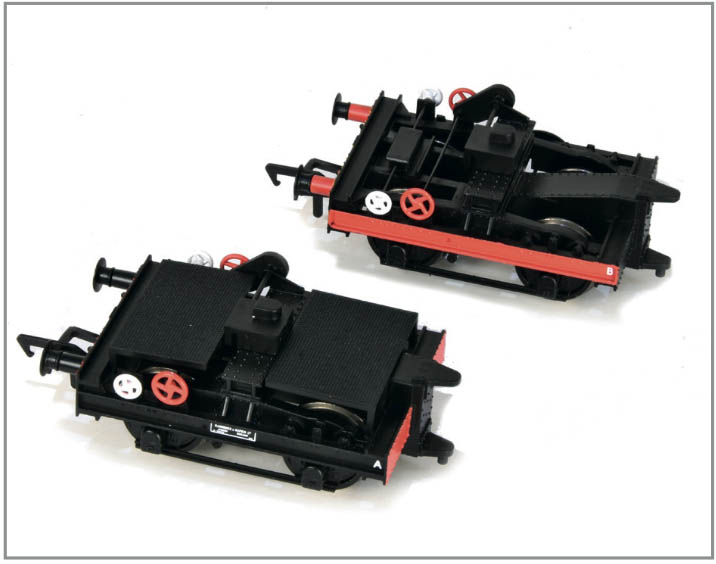 Variations can also be found in the relieving bogies which are modelled with either open frames or plated tops.

Operation: Each model is supplied with a key which operates both the jib and hook movement, and also provides access to the sockets too. 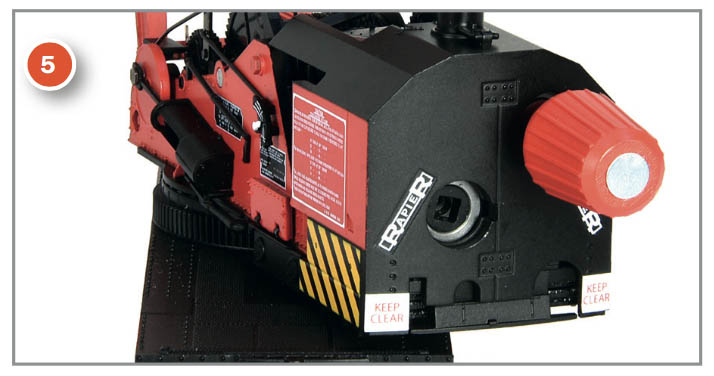 1. The sockets are located behind the two boiler washout covers which, when in place, are scale replicas of the covers found on the prototype.
2. The key is fitted with a magnet which is used to remove the magnetised covers.
3. With the cover removed, the socket is exposed- the left hand socket controls the hook.
4. With the two covers removed, both the hook and jib can be operated.
5. The key is engaged in the socket to operate the model. When operating the hook, the cylinders will also turn in synchronisation. 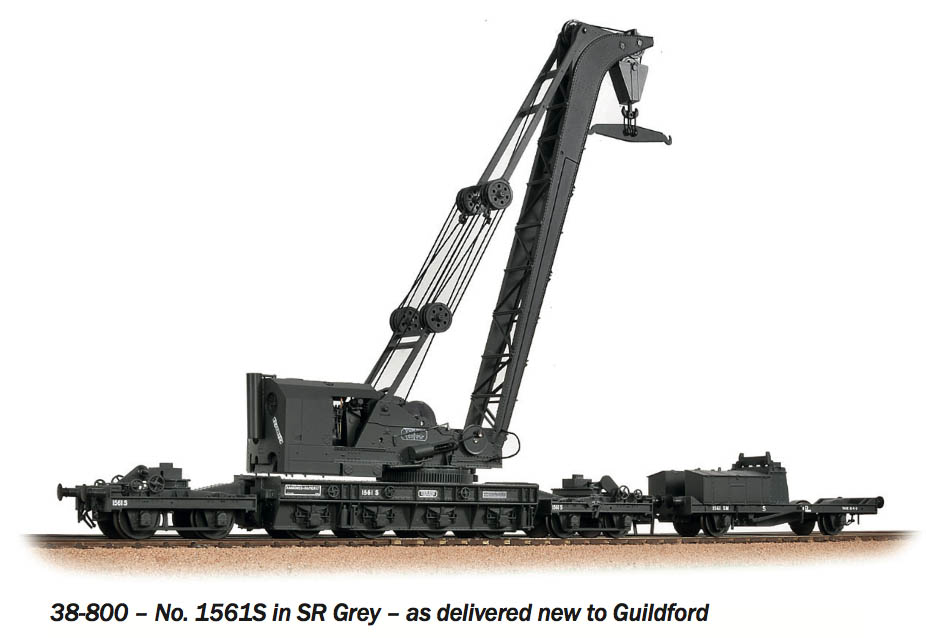 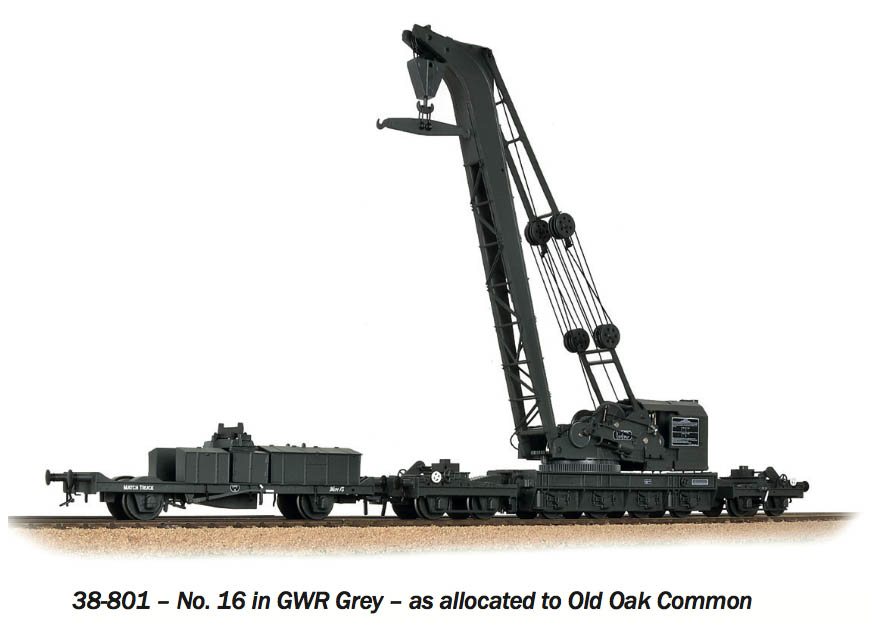 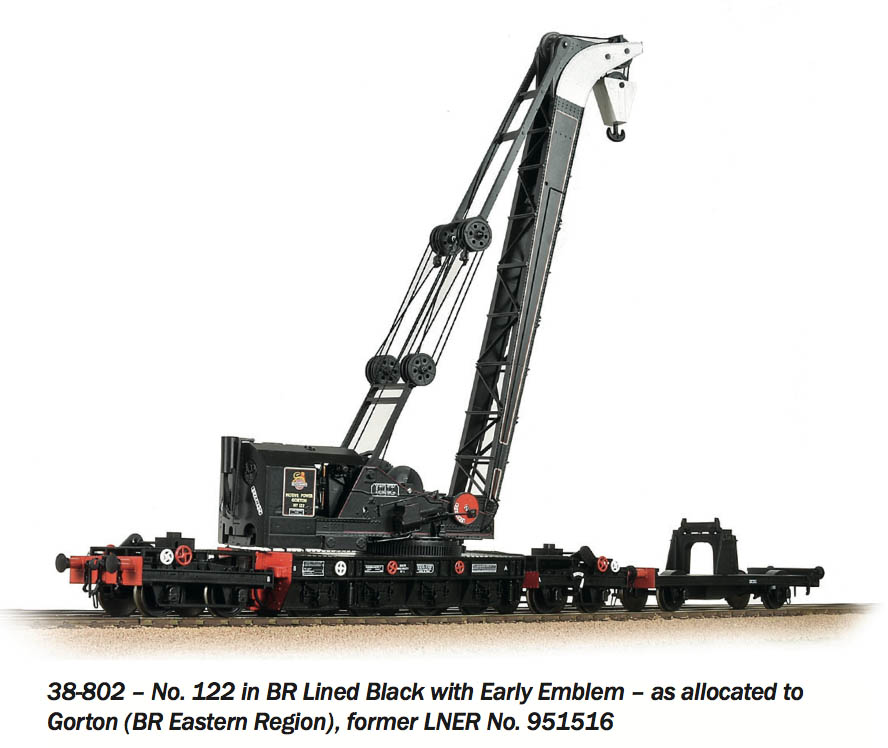 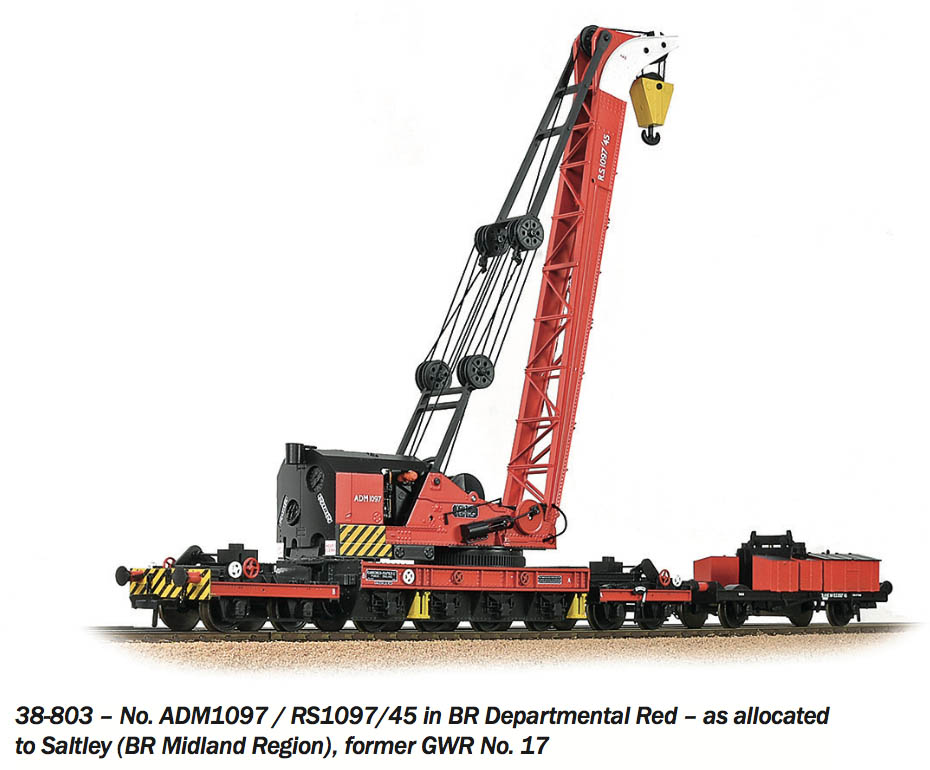 In 1939 the British Government ordered six 45-ton cranes from Ransomes & Rapier Ltd, based at Waterside Works in Ipswich, Suffolk. The design was based on the Southern Railway’s earlier 36-ton cranes, with modifications to suit the increased capacity. Upon delivery in 1940, two were supplied to the Southern Railway (SR) and the remaining four went to the Great Western Railway (GWR).
In 1942 the War Department requisitioned two Cowans Sheldon cranes from the London & North Eastern Railway (LNER) and sent them to Iran (then Persia) to help with the war effort. As a result of this, two replacements were ordered for the LNER from Ransomes & Rapier. The two new cranes differed from the original six in having outside steam chests above the cylinders and a different pattern of match wagon.
During construction, Ransomes & Rapier were able to draw on a large number of stock parts from railway companies – fittings such as axle boxes, buffers, boiler fittings and couplings were either of GWR or SR pattern. The design incorporated a lifting roof section and fold-down platform providing the crew with good visibility during operation of the crane. The 4-wheel match wagons were built separately to the cranes and so carry more detail variations, ranging from the number of toolboxes fitted to the position of the brake gear. Each crane was equipped with a set of travelling gear enabling self-propulsion at speeds of approximately 5mph. The SR’s cranes were initially sent to Feltham and Guildford sheds, two locations within easy reach of London from where they could be deployed to assist with air-raid damage. Both would remain on the Southern Region throughout their working lives. The four GWR cranes were initially allocated to the depots of Old Oak Common, Wolverhampton, Canton and Swindon, and three remained on the Western Region until withdrawal. The fourth was transferred to the London Midland Region in 1963. The two LNER cranes were initially allocated to Kings Cross and Gorton, with one later transferred to the London Midland Region in
1958.

Both SR cranes, the two LNER cranes and three of the GWR cranes survived into preservation – although one of the Southern cranes (1560S) was cut up in April 2010. The remaining six can be found at various preserved railways across the UK, with several still operational and providing lifting capacity for the railways at which they are now based.

Keep up to date with all our news & offers.
Our latest newsletter can be viewed here >>>

Get in Touch with us Socially

Powered by Cybertill (supplier of retail software, EPoS systems and ecommerce solutions)
⚠We use cookies on this website. They help us to know a little bit about you and how you use our website, which improves the browsing experience and marketing - both for you and for others. They are stored locally on your computer or mobile device. To accept cookies continue browsing as normal. Or go to the cookie policy for more information and preferences.
X